Johannesburg – Thirty hippos have died in the Kruger National Park as a result of a bacterial virus, SANParks said on Monday.

The SA National Parks said an anthrax outbreak was identified in late August and post mortem results confirmed that most of the dead hippo were infected.The carcasses were discovered along the Letaba and Olifants rivers.

Spokesperson for SANParks, Reynold Thakhuli, explained that anthrax was a highly infectious disease in animals caused by the bacterium bacillus anthracis.

He said the outbreaks were a natural occurrence in the northern parts of the Kruger and were experienced more or less every ten years. 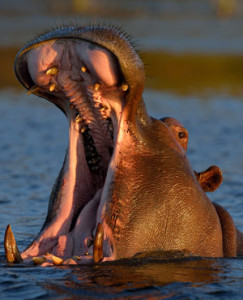 “It is thought that the disease is spread mainly through vultures and blowflies. Vultures are immune against it and they spread the disease by consuming contaminated meat from affected carcasses and then defecating in water bodies where they regularly drink or bath.

“The toxins released by the bacteria when it sporulates are also fatal to some species, ” said Thakhuli.

“It is also closely linked to population density – when certain species like kudu and hippo reach high densities then anthrax spreads more rapidly.”

Park rangers were monitoring the rivers to check whether any more animals had died.

In a previous outbreak, around 2 000 animals were killed.