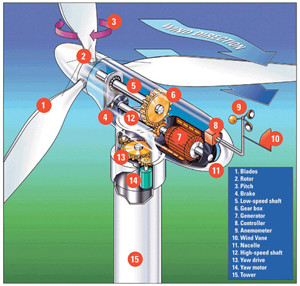 Wind is a form of solar energy. Winds are caused by the uneven heating of the atmosphere by the sun, the irregularities of the earth’s surface, and rotation of the earth. Wind flow patterns are modified by the earth’s terrain, bodies of water, and vegetation. Humans use this wind flow, or motion energy, for many purposes: sailing, flying a kite, and even generating electricity.

The generator creates electricity using much the same principle as the alternator on your car. A magnetic rotor on the high speed shaft inside the generator housing spins inside loops of copper wire that are wound around an iron core. As the rotor spins around the inside of the core it creates “electromagnetic induction” through the coils that generates an electrical current. That current is then regulated and fed into the grid after some modification so that it can be used in our homes or routed into a battery bank for storage. Where a battery bank is used, the regulator prevents overcharging.

Wind powered generators can produce quite large amounts of electricity if the wind blows fast enough. Power available from the wind increases in proportion to the wind speed cubed. This means that the available power increases dramatically as the wind speed increases, for example at a wind speed of 29 km/h the power available from the wind is approximately 300 Watts per square meter, but at 58 km/h it increases to about 2500 Watts per square meter. So on windy days, wind turbines can easily produce as much electricity as a small to medium sized diesel generator.

Wind turbines require non-turbulent wind to achieve their rated power. Air flowing within 6m of the ground or over “rough” terrain such as houses, trees, steep hills etc. is very turbulent. Some form of tower is required to get the wind turbine high enough into non-turbulent, “clean” air flow. This requirement makes wind generators more suitable to rural applications such as farms where a large tower will not seem out of place and the tower can be located in an open space away from nearby buildings and trees which will cause turbulence. Obviously this does not rule out urban applications if you (and your neighbours) are willing to raise a tall enough tower on your property. 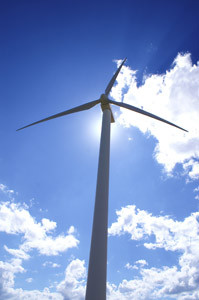 • Good for people: Unlike fossil fuels such as gas or coal, wind turbines create no emissions, making wind power one of the cleanest sources of energy on the planet. The use of wind turbines instead of fossil fuels for power improves air quality for people and reduces pollution-related health costs.

• Wind is a completely renewable fuel source: As long as the sun shines, the winds will blow. And wind power produces no health risks and no air pollution. Wind turbines don’t produce emissions, so they do not contribute to climate change. In fact, they do the opposite by providing a replacement for fossil fuel power generation. Unlike large hydropower, wind does not flood land and displace the people and animals that live there. Using wind energy in place of conventional energy also reduces smog.

• Good for the Environment: Every unit (kWh) of electricity produced by the wind displaces a unit of electricity which would otherwise have been produced by a power station burning fossil fuel. This is a generally accepted fact used by many organizations including government in their environmental calculations. Using a 1 MW wind turbine to produce electricity instead of burning coal will leave 900,000 kilograms of coal in the ground and reduce annual greenhouse gas emissions by 2,260 tones. This has the same positive impact as taking over 410 cars off the road or planting 10,000 trees.

• Good for the national grid: Because wind farms are environmentally friendly and can be built in various sizes, they can be positioned close to areas which have a high demand for power. This type of “distributed generation” lightens the burden on our electricity transmission grid and decreases the likelihood of blackouts and power shortages. And unlike fossil fuels such as natural gas, wind power can also provide low prices and long-term predictability for consumers.

• Good for the economy: Wind is free and an infinite resource. As wind turbine technology advances and the cost of harnessing this widespread resource decreases, wind power is becoming increasingly viable as an alternative to fossil fuel and nuclear power generation. The cost of generating wind energy is falling while the price of natural gas, oil and uranium continues to rise.