Durban – Eighty percent of Durban beach water that was tested during the past year did not meet South African water standards, the Independent on Saturday reported.

The newspaper reported that the city’s beach water fell foul of the SA Quality Guidelines. 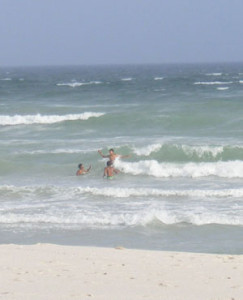 The tests carried out by the eThekwini municipality’s water and sanitation department for the year, ending July, had revealed high levels of E coli and Enterococcus bacteria, which cause cholera and gastro-intestinal illnesses.

The newspaper also reported that Professor Hideshige Takada from the Tokyo University of Agriculture and Technology said Durban’s Isipingo beach had the highest levels of hexachlorocyclohexane (HCH) in the world.

HCH is a toxic compound used as an insecticide on crops and wood and for treating scabies and head lice.

Takada’s research was based on samples taken from 200 sites around the world.

Concentrations of HCHs in Durban were 61 nanograms per gram (ng/g), while in Port Elizabeth it was 5ng/g and on the Cape west coast it was 3ng/g.