“Minister Jeff Radebe congratulates the National Prosecuting Authority and commends [the] magistrate for imposing an appropriate sentence that fits the crime,” he said in a text message. 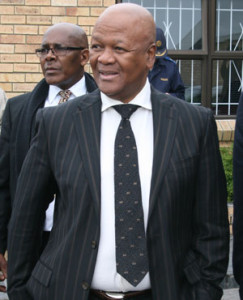 “Rhino poaching and smuggling threatens the government’s efforts in preserving our environment and economic stability of the country.”

Chumlong Lemtongthai pleaded guilty to paying prostitutes who posed as hunters to harvest rhino horns, which were then sold on Asia’s traditional medicine market.

The group is thought to have netted around 26 rhino horns.

In handing down sentence, the magistrate said he did not want his grandchildren to grow up without being able to see rhinos, reported Eyewitness News.

More than 500 rhino have been killed in South Africa this year.

It said Lemtongthai was arrested in 2010, and together with five other suspects, charged on various counts of fraud, customs and excise violations, and transgressions of environmental legislation.

“Today’s sentence was the successful outcome of comprehensive investigative work and co-operation between various state law enforcement agencies in the country…” Sars said in a statement.

However, the conviction of one individual was not a sufficient deterrent against rhino poaching, it said.

“Law enforcement and state agencies in the country have to do a lot more and work together far more effectively to combat fraud, corruption, and abuse of the entire system that includes the movement of passengers into and out of South Africa, the issuing of hunting permits and the illicit transfer of money, and the enforcement of environmental and other laws.”