Quito – The unique bird and reptile species that make the Galapagos Islands a treasure for scientists and tourists must be preserved, Ecuadorean authorities say – and that means the rats must die, hundreds of millions of them.

A helicopter began dropping nearly 22 tons of specially designed poison bait on an island on Thursday, launching the second phase of a campaign to clear out by 2020 non-native rodents from the archipelago that helped inspire Charles Darwin’s theory of evolution. 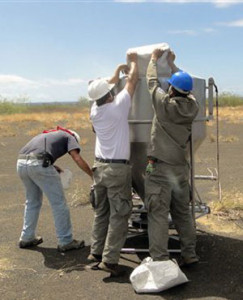 The invasive Norway and black rats, introduced by whalers and buccaneers beginning in the 17th century, feed on the eggs and hatchlings of the islands’ native species, which include giant tortoises, lava lizards, snakes, hawks and iguanas. Rats also have depleted plants on which native species feed.

The rats have critically endangered bird species on the 19-island cluster 1 000km from Ecuador’s coast.

“It’s one of the worst problems the Galapagos have. [Rats] reproduce every three months and eat everything,” said Juan Carlos Gonzalez, a specialist with the Nature Conservancy involved in the Phase II eradication operation on Pinzon island and the islet of Plaza Sur.

Phase I of the anti-rat campaign began in January 2011 on Rabida island and about a dozen islets, which like Pinzon and Plaza Sur are also uninhabited by humans.

The goal is to kill off all non-native rodents, beginning with the Galapagos’ smaller islands, without endangering other wildlife. The islands where humans reside, Isabela and Santa Cruz, will come last.

Pinzon is about 1 812ha in area, while Plaza Sur encompasses just 9.6ha.

“This is a very expensive but totally necessary war,” said Gonzalez.

The rat infestation has now reached 10/m2 on Pinzon, where an estimated 180 million rodents reside.

The director of conservation for the Galapagos National Park Service, Danny Rueda, called the raticide the largest ever in South America.

The poisoned bait, developed by Bell Laboratories in the US, is contained in light blue cubes that attract rats but are repulsive to other inhabitants of the islands. The 1cm2 cubes disintegrate in a week or so.

Park official Cristian Sevilla said the poison will be dropped on Pinzon and Plaza Sur through the end of November.

A total of 34 hawks from Pinzon were trapped in order to protect them from eating rodents that consume the poison, Sevilla said. They are to be released in early January.

On Plaza Sur, 40 iguanas were also captured temporarily for their own protection.

Asked whether a large number of decomposing rats would create an environmental problem, Rueda said the poison was specially engineered with a strong anti-coagulant that will make the rats dry up and disintegrate in less than eight days without a stench.

It will help that the average temperature of the islands is 24deg C, he added.

The current $1.8m phase of the project is financed by the national park and non-profit conservation groups including Island Conservation.

The Galapagos were declared protected as a Unesco Natural Heritage site in 1978. In 2007, Unesco declared them at risk due to harm from invasive species, tourism and immigration.