Free the Grid – The Great Solar Rip Off 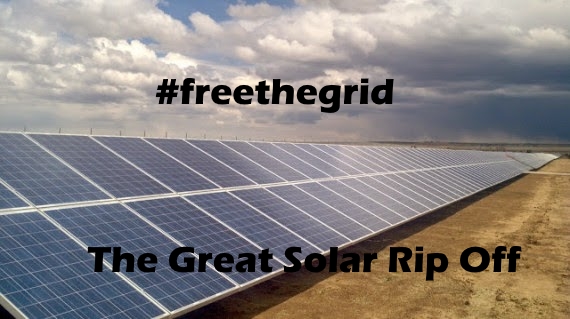 We are being misled by the Minister of Energy, Eskom and the entire IPP program. Today we were informed that a 100 megawatt plant cost them 62 billion rand. Sadly, this is probably true. BUT. The reason why it cost so much money is due to the very people that are now complaining about the cost of it and even worse, using it as platform to justify the use of nuclear power.

Eskom has stalled signing a power purchase agreement citing increasing costs (see: http://www.iol.co.za/business/companies/eskom-stalls-ipp-deal-as-costs-escalate-2062801 ) . They are correct in their assessment regarding the pricing of the project and the overall net cost to consumer/eskom over the course of its proposed 20-year life span. They state that the project will cost consumer/eskom 62 billion rand. 62 Billion Rand?? The numbers are simply ludicrous. Yet Eskom not only is compelled to basically sign off on it but in addition to which has signed off on many similar deals. How is this even possible? How is it possible that a solar plant and its intended output could cost so much?

I am in the solar business. Frequently I get requested to design solar plants from 10kW through to 150MW. I am completely in touch with pricing regarding hard equipment costs and installation costs. So to put you in perspective. Even on a retail level, the cost of 100MW, with top end equipment, on current exchange rates and fully installed with generous income figures costs only R1 958 692 149. In a nutshell. It costs R2 billion rand. This means that you could build one new plant every year for 31 years and it would cost what they are being charged for a single plant. Bare in mind also, that the cost of power production is free since it is powered by the sun. Add to that some ongoing costs for maintenance and cleaning, it in no way does it come anywhere near the figures been proposed by Eskom. So how did we get into this position?

It all started when the IPP programme was first created. Some geniuses came up with the application vetting process. You had to pay R15 000 just to download the documentation for bid submission. Once downloaded you were met with an onslaught of regulations and requirements. The few big problems with this document became immediately apparent. First. You had to have experience in similar scale projects. Now think about that. This is the first project of its type ever in this country’s history and yet, you had to have experience with these projects. Immediately almost every South African company that once celebrated the launch of the programme was discounted from participation completely. Second. The government did try to include South African companies by forcing local content requirements. This itself was almost farcical. There has never been a scale photovoltaic manufacturer in this country that was 100% South African owned, ever. All plants locally are assembly plants and foreign companies. The same is true for the inverters, there is zero scale manufacturers locally. Finally, perhaps been aware of the document shortfalls they included a BEE (Black Economic Empowerment) component. This was partially successful but the aforementioned criteria meant that they were getting a tiny segment of its true potential. Third. The financial modelling requirements and engineering requirements placed on each potential plant by the government meant that only seriously large engineering firms could really participate. Again another blow to the local industry. Fourth and finally. The cost just of the submission process, with its requirements for EIA approvals, grid proximity, permissions, financial modelling, engineering designs meant that the cost, aside from your downloaded documents (R15k), were so ludicrously expensive that only foreign banks, some well-connected local banks and extremely wealthy individuals had the resources to pay all the costs and gamble on getting nominated as a winning bid.

I still recollect going to the opening of the IPP program at a launch at Gallagher estate in JHB. On arrival the first thing that struck me was how many foreigners there were. It was like a Turkish bazaar and huddled in a small group standing in the corner were literally a handful of South Africans. I still asked the NERSA representatives what the point was of making a programme that no South African could really participate in. No answer.

So, along with a document like this we need to make some concessions. There is a legitimate requirement for safety both in power production and in stability of the grid. There is also a need to have certainty that what you are buying is going to work and has some beneficiation components built into it with all the correct permissions. However, not in the way this was done and not to the detriment of all electrical consumers and local firms. All this has achieved is a negative view on solar power being costly and created a basis on which our minister can drive in nuclear power.

How should this of been done?

Simple. Eskom builds its own solar plants. I know right. Sounds crazy but if they didn’t outsource this requirement to fat wealthy foreign companies and businessmen, we wouldn’t have found ourselves in this position. Why? Because I am stating a fact. It is completely factual that 100MW of solar power should only cost 2 billion rand, we are paying more because we have been ripped off. Eskom could have saved PLENTY and would have been able to benefit local communities for cleaning and maintaining the systems thereby creating work NOT benefits. Even if the system underperformed there is no substitute for FREE electricity. It’s free. No input costs of coal, uranium or natural gas, it makes power every day the sun shines. It is mathematically mind numbing that you could even for a second believe that any other type of power type could ever be cheaper (or faster to build) then renewable energy because it has none of the aforementioned costs. In an ideal world. We would do the following:

Build our own solar panels. Most local companies import from Q Cell in China and assemble so why not make a South African solar panel, call it sunshine in whatever language you like and create a local industry. Then, direct investment into local inverter manufacturing firms, firms like Microcare SA or MLT Drives and get them to scale up operations and create grid scale inverters. They have such brains behind them it’s ludicrous that they are dredging in the back waters behind all this imported product. More importantly they employ local people already by the arm load and would need to employ thousands more to keep up with the demand. Then stop exporting our freaking copper to China and manufacture locally, also manufacture solar cable, mounts and connectors. It’s really not that hard. We are not talking about splitting an atom, we are talking about stranding wire. Then free up the grid. Stop trying to tax local consumers with petty income derived from the sale of electricity. Allow consumers to put power into the national grid with safety standards in place but no requirements for net metering or ongoing costs. If the value of generation from solar power sources surpassed grid demand, then allow them to keep it for free. You do not have to pay them out. You just have to allow them to offset their bills. Most importantly. Should any of this idea be adopted and Eskom finally wakes up to the power of renewable energy. I only then ask that they stop charging consumers for power that they obtain freely from the sun/wind/ocean. They can charge a rate for maintenance but let the consumer enjoy the benefits obtained from free power. Money left in the consumer’s pocket stays in the economy and more importantly provides a break for companies that are already reeling under electricity costs.

If that sounds crazy to you lets just bare in mind that Chile generated so much power from their RE systems that they gave their citizens in some areas free electricity for roughly 192 days, almost two thirds of a year. (http://www.independent.co.uk/environment/chile-solar-power-panels-free-electricity-give-it-away-a7063131.html ) Their problems are slightly different now as a result because albeit that some consumers got cash windfalls, the developers of those plants are struggling to get a return on their investments. For this reason, we need to completely exclude middle men or third party suppliers and do it directly as a national project.

If the concept of free power is not sufficiently enticing to you then consider this. All forms of fossil fuel power generation require water. This in a time when farmers are facing massive losses due to drought (http://yourneighbourhood.co.za/impact-of-water-shortage-in-south-africa/) and the department of water affairs estimates that we could be in serious water crises by 2030. Is this really responsible? Especially when you consider the impact that the latest coal fire plant Medupi is going to have (http://www.bdlive.co.za/opinion/columnists/2013/07/24/little-water-for-a-thirsty-medupi) . That’s an astronomical amount of water that could be utilised for the production of food/drinking water, but instead will get spent on power generation. At present the water consumption average for all power in South Africa is roughly 1.32Litres per kilowatt hour?? In other words, they utilise more water to generate power than the power they produce, take a look at a production graph from Eskom themselves:

If you are unimpressed with the water argument what about CO2 emissions? In a time of world uncertainty regarding climate change, our agreement to the global carbon emissions protocol, our implied carbon tax that looms over the horizon. How on earth could we even consider other types of power sources. At present, Eskom produces power at 0.99 kg of coal per kilowatt hour of energy. Think about it. That’s 1.32L of water and 0.99kG of coal just for 1 measly kilowatt hour of electricity.

For those of you thinking that nuclear is a better option because it’s cleaner. Let me assure you that, albeit that nuclear is in fact cleaner in the way it produces power, it ceases to be cleaner when you incorporate the massive levels of CO2 emissions generated both with the mining and transporting of uranium. Then if you also take into account the absolute wasteland created from their water emissions and the unavoidable mess of nuclear waste disposal, I question myself how on earth it’s possible that we could even consider any other source other than RE.

I hope that I have not bored you with this document. I will be more than happy to supply you with source documentation on costs of solar plants down to current quotations received for the imported equipment. Solar power is not a scary creature of science; it is a simple mechanical truth that has for too long been over engineered. There are countless local systems already feeding into the grid. Systems put up by the average man. It does not require some massive degree of genius to achieve why over pay for it, FREE THE GRID.