Onekama – For more than a century, easy access to Lake Michigan has made Onekama a popular place for summer visitors and a refuge for boaters fleeing dangerous storms. Now the community itself needs a rescue, from slumping lake levels that threaten its precious link to open water.

The Great Lakes, the world’s biggest freshwater system, are shrinking because of drought and rising temperatures, a trend that accelerated with this year’s almost snowless winter and scorching summer. Water levels have fallen to near-record lows on Lakes Michigan and Huron, while Erie, Ontario and Superior are below their historical averages.

The decline is causing heavy economic losses, with cargo freighters forced to lighten their loads, marinas too 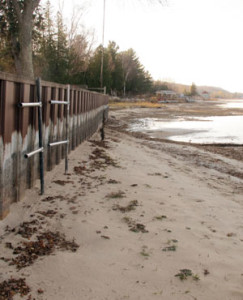 shallow for pleasure boats and weeds sprouting on exposed bottomlands, chasing away swimmers and sunbathers.

Some of the greatest suffering is in small tourist towns that lack the economic diversity of bigger port cities. Yet they are last in line for federal money to deepen channels and repair infrastructure to support the boating traffic that keeps them afloat.

“How do you like our mud bog” township supervisor Dave Meister asked on a recent afternoon, gesturing toward the shoreline of Portage Lake, part of a 1 012ha inland waterway that connects Onekama to Lake Michigan.

A wide expanse that normally would be submerged is now an ugly patchwork of puddles, muck and thick stands of head-high cattails. A grounded pontoon boat rested forlornly alongside a deserted dock.

The army corps of engineers has estimated that about 30 small Great Lakes harbours will need attention in the next couple of years.

In bygone days, friendly members of Congress would slip money into the federal budget to dredge a harbour. But so-called earmarks have fallen out of favour, leaving business and civic leaders wondering where to turn. A desperate few are raising money locally for dredging but insist they can’t afford it on a regular basis.

Tourism has sustained Onekama since the early 1900s, when northwestern Michigan coastal towns became popular with wealthy visitors from Chicago, Milwaukee and Detroit. On a typical summer day, the community’s marinas are crowded with yachts, speedboats and fishing charters.

But the falling water levels are taking a toll, illustrating how extensively the health of the Great Lakes affects the economy of a region that is home to more than 30 million people extending from Minnesota to New York.

Lake Michigan’s level at the end of October was more than 0.6m below its long-term average. The corps of engineers says without heavy snowfall this winter, the lake may decline to its lowest point since record-keeping began in 1918.

The channel that connects Portage Lake and Lake Michigan is now about 2m deep at best. When the water is choppy, some vessels can hit bottom. If things get much worse, Onekama may be effectively cut off from the big lake.

“Businesses would close. People would be laid off. It would be devastating,” said Jim Mrozinski, owner of Onekama Marine, which services and stores pleasure craft and draws customers from across the Upper Midwest. He owns three marinas, one now unusable because of shallow water. If he’s lucky, the others will have enough depth to rent perhaps 10 of the 55 slips next spring.

Onekama’s year-round population is less than 2 000. Much of its tax base comes from expensive waterfront homes owned by summer residents who come for the boating and fishing. Without the link to Lake Michigan, property values would plummet, hammering local government budgets, Meister said.

Many places around the Great Lakes are having similar problems. At least a dozen boats have run aground this year in Lake Ontario around the harbour in Orleans County, New York. The state of Wisconsin warned boaters to watch for stumps, boulders and other hazards lurking just beneath the water.

What makes the situation particularly frustrating for small Great Lakes communities is that a fund for dredging and other harbour maintenance already exists. It’s generated by a tax on freight shipped at US ports and raises about $1.5bn a year. But about half of the money is diverted to the treasury for other uses. Members of Congress from coastal states are pushing to change that policy.

Even if the effort succeeds, there’s no guarantee that communities like Onekama will get a share of the cash. The Corps of Engineers gives top priority to large ports such as Duluth, Minnesota, Detroit and Cleveland. Whatever is left goes to medium-sized harbours that also accommodate cargo ships.

The region’s 112 small harbours, including 71 with only recreational traffic, have relied on budget earmarks since the 1990s.

“Many of these towns wouldn’t exist if it wasn’t for their ports,” said Mike O’Bryan, chief of engineering and technical services for the Detroit district office.