Oslo – The Amazon rainforest is less vulnerable to die off because of global warming than widely believed because the greenhouse gas CO˛ also acts as an airborne fertiliser, a study showed on Wednesday.

The boost to growth from CO˛, the main gas from burning fossil fuels blamed for causing climate change, was likely to exceed damaging effects of rising temperatures this century such as drought, it said. 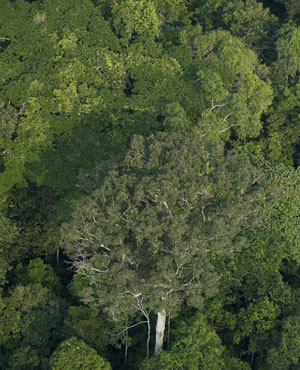 “I am no longer so worried about a catastrophic die-back due to CO˛ – induced climate change,” Professor Peter Cox of the University of Exeter in England told Reuters of the study he led in the journal Nature.

“In that sense it’s good news.”

Cox was also the main author of a much-quoted study in 2000 that projected that the Amazon rainforest might dry out from about 2050 and die off because of warming.

Others have since suggested fires could transform much the forest into savannah.

Plants soak up CO˛ from the atmosphere and use it as an ingredient to grow leaves, branches and roots.

Stored carbon gets released back to the atmosphere when plants rot or are burnt.

A retreat of the Amazon forests, releasing vast stores of carbon, could in turn aggravate global warming that is projected to cause more floods, more powerful storms and raise world sea levels by melting ice sheets.

“CO˛ fertilisation will beat the negative effect of climate change so that forests will continue to accumulate carbon throughout the 21st century,” Cox said of the findings with other British-based researchers.

The scientists said the study was a step forward because it used models comparing forest growth with variations in the rising levels of CO˛ in the atmosphere.

It estimated that the damaging effects of warming would cause the release of 53 billion tons of carbon stored in lands throughout the tropics, much of it in the Amazon, for every single degree Celsius of temperature rise.

The benefits of CO˛ fertilisation exceeded those losses in most scenarios, which ranged up to a 319 billion ton net gain of stored carbon over the 21st century.

Climate change would be more damaging for the Amazon if greenhouse gases other than CO˛, such as ozone or methane which do not have a fertilising effect, take a bigger role, the study said.

It did not factor in damaging effects from deforestation, mostly burning to clear land for farms, which is blamed for perhaps 17% of world greenhouse gas emissions from human activities.

But predictions of a die-back in coming decades had led some people to conclude that there was no point safeguarding trees.

“Some people argued bizarrely that it would be better to chop them down and use them now,” Cox said, adding that the new findings meant that reasoning was no longer valid.

By underlining the importance of trees for soaking up CO˛, the study could also bolster slow-paced efforts to create a market mechanism to reward nations for preserving tropical forests as part of UN negotiations on a new treaty to slow climate change, due to be agreed by the end of 2015.